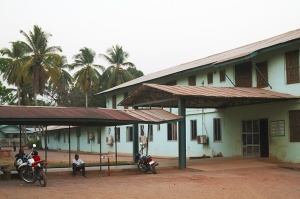 Today, 17th October, 2014, is another day in Sierra Leone where the Ebola outbreak is still ravaging the country.

With hope, we acknowledge the arrival of the 119 British Medics who shall be helping in caring for Ebola patients in a village in the outskirts of Freetown. Of course, they will have to pay more attention in this centre where a 60 bed will be provided for every other infected patients and 12 beds will be provided for health workers both local and International. This is great hope, something we never had. It is alleged that, later, the British medics will spread to assist in the northern part of Sierra Leone where our hospital is situated. The time is not yet known. It is highly expected that some of them might be assigned to work with us in the screening and triaging of patients visiting our centre. If that promise by the Ministry of Health is fulfilled, then our people will survive.

The Cuban 165 Medical doctors and nurses also arrived about two weeks now. They have a mandate to only render medical services in Freetown. Negotiations are on going with their home Health Ministry to permit them be assigned to upcountry. Here again, our hospital was promised to receive some.

The situation that is prevailing in the country is very appalling. The reason for this is because, the population which used to live with denial and misconceptions have accepted the reality of Ebola virus existence. Now, what is dramatic is that Health workers are scared of giving care irrespective of what amount of money you give them. Apart from logistics being a chronic problem, competence is a great challenge at all levels and the self confidence is completely absent from health personnel. I will agree with the statement of the new Deputy Health Minister, “ Nurses have not been well trained’ especially with regards to Infection Prevention and Control(IPC). Worst of it, most of our health facilities never considered including in hospital budget a greater support to IPC implementation within the hospital context.

As at today, 17th October, the hospital is yet not providing services to the public since September, 22nd, when one of our Brothers, a Medical Doctor, Br. Manuel Garcia Viejo, a Spaniard, got himself infected with the Ebola Virus, on 11th September, just 3 days after the quarantining of the hospital, which re-open on September, 8th , 2014. This date of infection is agreed upon because, it was the day when one patient coming from an Epiarea within the Lunsar zone, came to consult with Dr. Manuel, escaping from a quarantined home, unknown to the doctor. This patient breeched the screening protocols which was in place but as a result of a weak implementation of protocols, the said patient sat by the door of the Consulting room of Dr. Manuel. Upon arrival at his office door, no one knew what happens there. Later, on the 13 September, we learnt that the said patient had died of Ebola, because he was from a quarantine house where many persons had died of Ebola.

When Dr. Manuel learnt of this death, he became worried. His illness became noticed on Monday, 15th September, 2014, when he failed to pray with the other Brothers as usual in the morning. However, he managed to carry out a surgical emergency operation where he suddenly collapsed and was sent to the house to rest. This continued until Wednesday, his conditioned worsen and on Thursday, 18th September, he was evacuated to Freetown at the Emergency Hospital where there was a Ebola Care Unit. He was diagnosed with Ebola Virus and later repatriated to Spain, by the Spanish Government, a decision which was hard for him to take. He passed away on September, 25th ,2014 in Carlos III hospital, Madrid.

When this happened, it was just a normal situation for the entire staff and the Brothers of St. John of God to live in fear as from that moment again. So far, we have lost 8 staff from the hospital. Many questions were asked: What happened that this could take place? What went wrong?

The authorities of the Brothers kept on asking such questions until, it was agreed together that we must acknowledge that at this stage we can no longer offer regular health services to the public alone without the support of Government or other Organisations. So since then, September, 28th 2014, we have been in search of this collaboration.

We reviewed our preparedness within the hospital again by the Hospital Ebola Task force. We realized that we needed further training on other aspects in addition to Basic Infection Prevention and Control (IPC) measures.

From September 1-6, 2014, the entire staff went through IPC training organized by the Hospital funded by CORDAID Netherlands, on:

From September 30- October 15th 2014, we organized an intensive training again for all staff on Patient care Management with regards to anticipating a possible suspected Ebola patient to escape the screening protocols whilst giving care to such patient. During this 2 weeks long training funds provided by MANOS UNIDAS, Spain, and MISEAN CARA, Ireland, we focused on:

This time around a lot of emphasis was made on Safety Operational Protocols which was drafted as the training was going on. We realized that it was key to have such a relevant document at this time to serve as a watch guide in carrying out monitoring and supervision of activities in the hospital.

Our objective now was to convince the Ministry of Health and Sanitation(MOHS) to establish Ebola care units and Treatment Units in Lunsar. Also, the MOHS to support the hospital with Medical Doctors with expertise to work at the triage and screening point.

Currently, the MOHS through the World Health Organisation(WHO) has improved upon the Observation unit which we renovated at the back of the Hospital to a “Holding Centre”. This centre will serve as a dropping centre for suspected patients whose Blood samples will be collected and within 24-48 hours, laboratory result shall be made available and decision for evacuation shall be taken or further regular management in our hospital. This centre will be ready for use by the end of next week. Staff have been recruited and trained to work there. The Chiefdom health committee shall be responsible to oversee the functioning of this centre now. The hospital has provided space and building, the road at the back will be operational as from now on with 24 hours police and military security personnel.

The issue of logistics for the proper functioning of this centre has been discussed and our hospital has been mandated to collect supplies directly from the National Medical Stores to support the centre and it will be replenished as it is requested.

The centre has been provided with a 2 Burial Heasre vehicles, and an Ambulance. These three vehicles are under the supervision of the Hospital. It has answered the question of rapid response of evacuating confirmed patients to the treatment centres. Currently, the International Medical Corps(IMC) is constructing 100 beds treatment unit at the outskirts of Lunsar town, Rogbalan village, and an annex ward for staff who might get infected. This structure will be a permanent structure and will be completed by the end of November, 2014.

With all these developments, two days ago, the WHO training team visited the hospital to carry out an IPC assessment to identify the gaps in our IPC measures in place. We were appraised well but still need some additional training on Disease Surveillance for the IPC focal person who has now been identified and the office established, and also on fever surveillance in the ward. WHO has also opted to improve the triage space the hospital has identified and renovations will be done this week and training of 10 staff will take place.

What is expected now and we are all waiting is to receive the posted medical officers from the MOHS and the authorities of the Brothers will then revisit the decision and possibly we will start offering regular health services to the Public by 1st week in November, 2014.

Meanwhile, everyday, the staff report for work at the hospital everyday. There is something to be done. Some are engaged in community health activities and others sanitary, administrative, storage, and maintenance.

Next week, with funds provided by MANOS UNIDAS, Spain, we are organizing sessions with all the local tribal heads in the 41 villages of Marampa, the contact tracers and Surveillance officers to discuss other strategies to take in order to reduce the spread by breaking the chain of infection. The most challenging issue with the spread now, is evacuating sick persons from families to a health facility which was not available but now available, adherence to safe practices in families especially when relatives are sick or dead.

Some hospital staff are engaged in community sensitization, contact tracing activities and information alert reporting of sick persons in families.

We hope to do more.

The situation In the Health Centre at Lungi

The Health centre at Lungi continues to render health services to the public. We have kept the facility functioning up to this time and we have now made a one week programme to engage the staff on the training we have given to the staff of the Nursing School and Lunsar next week. The Ebola situation is up surging now in that chiefdom and we are worried about that again. Thank God, so far, none of our staff has contracted Ebola virus from a patient. But, presently, in the village where we are located, a family is high suspected now because one of the siblings has been referred to an Ebola holding centre at Port Loko Hospital. One of them went to participate in a burial of a relative in Waterloo, an epitown 12Km away from Freetown. On his return, we were informed and precautions have been taken. That family has been warned but no confirmed case yet. We are waiting.

From 21-28 October, 2014, the health centre will be closed to the Public so that our staff will undergo intensive training, fumigate the centre, clean all equipment and general maintenance and re-painting of the wards are done. It is our intention to construct an incinerator this time and get a laundry machine for the centre to wash the linens of patients especially. Hopefully, we will resume operations again by 1st November, 2014. We are sorry for this but we will need to do it as it is necessary.

The situation in the Nursing School

As a condition set by the state, all training schools were closed down and we hope that this will continue till the declaration of Ebola free country. Meanwhile, the staff continue to report for duty everyday, and general maintenance is going on the administrative building, hostels and classrooms. The school is being rendering the public as a training ground for health workers in the chiefdom.

Gratitude
We thank all of you for your generosity and commitment to help save a lot of lives. We thank the Prior General, Br. Jesus Etayo Arrondo, and the International Cooperation office in Rome, who are also tirelessly engaged in raising funds to pay regular wages of the staff.

We thanked the African Provincial Superior, Rev. Br. Bartholomew Kamara for his support in recommending all our request to partners for funding.

May God richly Bless you all.