THE EBOLA SITUATION- SIERRA LEONE IN THE STRUGLE

Since my last updates regarding our activities two weeks ago, a lot has also been done towards the opening of the hospital.

The photo below illustrates the entrance into the hospital. On the left side by the trees, there is a building there which was previously used as convalescent home and later as a student hostel has been transformed into the new triage structure for the hospital. This has become very necessary for the hospital to function. As at today, the technical advice from International Medical Corps(IMC) and OXFAM Sierra Leone are yet to be completed. What is key to these two organizations is safety to the staff and patients. There has to be zones for burning waste and washing reusable PPEs which was not part of the structure. We thank all of you who have contributed in one way or the other to renovate this building for the purpose. There has been a lot of restructuring of this building in order to ensure safety at the triage for both staff and patients. 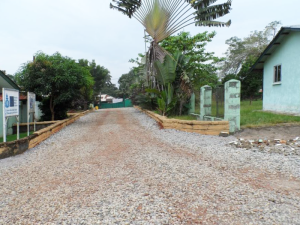 ENTRANCE OF THE ST. JOHN OF GOD CATHOLIC HOSPITAL

FACE VIEW OF THE HOSPITAL-2014 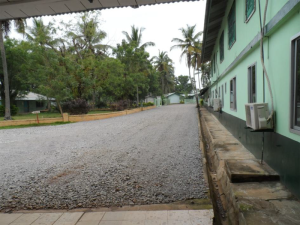 ONE OF THE PAEDIATRIC WARDS READY FOR MANAGING VERY SICK CHILDREN

INSIDE VIEW OF THE IN PATIENT DEPARTMENT 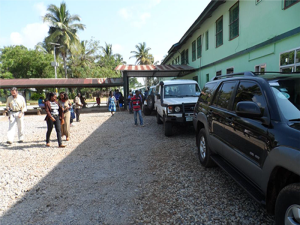 The hospital is yet to re-open its doors to offer clinical services to the public. From the technical point of view, IMC who have offered us the possibility of receiving technical and some basic material support to enable the hospital re-open and offer non Ebola services to the public, asked us to wait until, the Ebola holding and treatment centre which they have constructed is ready for use and then we can focus on non Ebola services. They were seriously engaged in trying to complete the work at their site and finally, by tomorrow, 30th November, 2014, the centre will be inaugurated and be ready for use by 2nd November, 2014 when we expect them to admit the first 4 patients.

Meanwhile, as we are waiting, we as a hospital continue to render the social services to the people. We believe that this approach has made a very positive impact in the catchment zone where we find ourselves. The evidence is that as at today, the Ebola holding centre in the hospital of a 9 bed capacity is only occupied by 1 patient. Three(3) patients have died in the centre since its operations began on November, 10, 2014.

As a hospital, we continue to mobilize the traditional leaders to cooperate with the medical team by alerting us of sick persons, as local task forces have been established and we provide monthly food and allowance for the ten(10) member task forces in each division(section) out of 17 sections in Marampa chiefdom. This approach is fruitful. Sick persons have been reported earlier than before and the response rate has been improved in our chiefdom. The number of deaths has reduced comparatively to the previous days. As a hospital, we continue to supervise the Holding centre in the hospital which has led the Ministry of Health to supply us with a good quantity of drugs and Protective materials for the centre. The staff working in the centre are happy and feel safe as protocols are been adhered to by all. As a hospital, we have taking the lead in the Marampa chiefdom in mobilizing the traditional leaders to own the Ebola fight. We took the bottom –top approach and it has worked successfully,. We need to continue with this approach till the battle is over.

From the bottom of my heart and on behalf of the Brothers, Co-workers and beneficiaries, I would like to express our gratitude to each one of you our benefactors, friends, and donors who have made it possible for the hospital through the Brothers of St. John of God meets the needs of our people today. A lot more needs to be done.

PREVAILING EBOLA SITUATION IN THE COUNTRY

As a nation, the Head of State has been very directive in the way forward to fight this EVD. And the only option he chose was the community collaborative approach. This led him to give all the traditional leaders a 21-day ultimatum in the month of November, 2014 to reduce the spread of new infections in each chiefdom. But what has happened: about 2000 new infections occurred in the month of November. There are many reasons for this as you may be aware. It was the good intention of the Head of State to give the baton to the Military who indeed have done well especially in the area of early response with regards to safe burials and isolation of patients. At least about 65-70% target has been achieved. A lot more needs to be done in the area of social mobilization and psychosocial interventions. Stigmatization, emotional destabilization of family members, economic hardships and hunger befit many people presently as there is no normal business. Now, the fear of health workers not been given special treatment as
promised by the British medics has changed the emotional atmosphere again since 9 Doctors have become infected now. To be frank, we as Sierra Leoneans and Missionaries are all frustrated with the British as they did not meet our expectations. However, through DIFID, funds are being provided to many NGOs to embark on Ebola activities.

The greatest concern now is the prevailing situation of the capital Freetown, where the daily report indicates 50% of the confirmed cases recorded from there. From all indications, a lot of work needs to be done at that level because it is now looking like an Epicentre.

What is still amazing is the slow change of behavior of the youths who continuously antagonize the non-touch approach. The behavior of the elders towards burials at home has drastically changed because, dignified burial of persons whether confirmed or not is allowed but safely done. This has relaxed the elders with respect to their dead persons whom a lot of respect is given to in this of our context.

So, as a country, we need to do more on our own especially with social mobilization and I think as a hospital, we will be much interested to also embark on this as we go along side giving medical attention in the villages and families.
RE-OPENING OF THE HOSPITAL TO THE PUBLIC OFFERING CLINICAL SERVICES

It is our intention to have recommenced clinical services offered to the public by December 1st, 2014. But based upon the technical advice of the 2 Orgnisations, we are still going to be patient waiting to see the progress of their activities. Fortunately again, it has been planned that by next week, there will a diagnostic laboratory for Port Loko district which will be based in Port Loko. Now, we have a holding and treatment centre in Lunsar, and a possible laboratory in few days time, gives us the hope of early diagnosis and safe patient management when we shall open.

My dear friends, one thing that is very clear and I would encourage you to understand it, is that this hospital is renowned in the country and when it opens its doors, it is will become a high risk hospital because people from all over the country would like to get medical attention from here because of the trust and healing they have always been receiving from St. John of God through the medics. So for that matter, we will need to be more cautious and tactical in opening the doors. That is why, we continue to meet the medical and nutritional needs of these rural people as at now. Be patient with us and continue to support us.

I thank you all sincerely and May God bless each of you.
Br. Michael M. Koroma