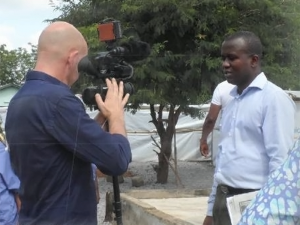 As I write this afternoon to you all, I am getting frustrated with the local and political leadership as well as the International Partners in health issues within the District and local Chiefdom where the Hospital of the Brothers of St. John of God is located.

Since the outbreak of EBV in Sierra Leone, the Brothers of St. John of God in collaboration with the co-workers had been serving the people of this country throughout until after the occurrence of several deaths of some of the co-workers. This automatically mandated the political leadership to quarantine the hospital. However, during this time, the St. John of God Brothers community Health centre located in Lungi had been rendering health services to the Public.

Meanwhile, all this time, we have been receiving various support from our Mother House in Rome, good partners from various parts of the world especially with regards to essential Protective Equipments, training of personnel and key to all meeting the Salary of our co-workers.

The Hospitaller Brothers and the co-workers resumed work again in September, when suddenly again, our only famous Medical Doctor, a member of our congregation, and the dedicated surgeon in the district was infected with EBV and later died. This incident scared all of us again and we embarked on re-training again for two weeks.

My dear friends, all this while, we have been working alone after several calls to the government and partners. Here what is fascinating is that the Health International partners only remain in Freetown or the larger cities like Bo, Kenema. Meanwhile, the Government continuously kept on asking us to re-open but without technical support, simply because they had always relied on this hospital as a savior for the people. Or how comes now we kept on asking for technical support when the Ministry of Health has not even one. The International partners are all scared to get to the field. The Government of Sierra Leone is making every effort to support us but not with the technical experts because they lack them as well.

What is so amazing now, there are lot of meetings taking place at district level but we see very little actions. A lot of promises have been made but no action which in fact has made us to conclude that the political leadership do not bother much about providing Non-Ebola services to its people rather they would like us to provide services to the public at our own risk. What is true is that the people need our services now and not later. But the big question is how we are going to render this service and under what conditions: we have to be very sure of the safety of staff and clients and be assured of sufficient Protective equipments.

All this while, we have been thinking on what to do in order lend our services in combating the outbreak. We embarked on providing food and medicines for quarantine families in order to facilitate the families to remain at home and also not to infect each other. We adopted 21 families since October 17 and until November 11, 2014, we completed the monitoring of these 21 families. Out this number, only 2 families had sick persons and a death which mandated them to restart again the observation period for another 21 days. In our evaluation, the success rate of containing the spread was 90%. For us we are satisfied.

The Brothers of St. John of God also offered a space at the Back of the hospital in order to host as a transit zone for suspects in families to be isolated. The World Health Organisation(WHO) accepted to construct the and expand the facility to an acceptable standard that is safe and Plan International accepted to manage it. Already, the centre has been occupied by 8 patients remaining only a bed empty, just two days of opening. The biggest challenge as at this morning is the collection of Blood specimen to be sent for testing. The patients had been hosted here but no specimen collected. This is the poor response we have been mentioning. The Brothers of St. John of God are overseeing the functioning of the centre in order to achieve its objectives and supporting it as well with essential logistics provided by our beloved donors that are lacking. We want to ensure that the patients who enter into the centre are treated well and eat well and all the staff remain safe at all times.

Whilst preparing to re-open the hospital on the first week of November, 2014, one health partner, International Medical Corps(IMC), who are responsible for running the Ebola Treatment Centre in Lunsar, approached us on Saturday,8th November, 2014, to discuss on the re-opening of the hospital whilst they will be taking care of Ebola patients and we take care of Non Ebola patients directly. We welcomed them and after their technical inspection of the Triage structure we have prepared in the hospital, IMC technical recommended that we hold on for a while, whilst they will re-organise our triage structure and they will eventually mange this triage and also provide training for our staff with all aspects concerning Infection Prevention and Control(IPC). I welcomed the offer but this will be done during this 2 weeks and by the 20th November, when the facility IMC shall be managing will be commissioned with 10 beds(5 for confirmed and 5 for suspects).

My dear friends, I know and am convinced that a hospital that is closed is like leaving the people to die without any help which is a deprivation of one of the Human Rights- right to live and access to health. Despite that, we the Brothers of St. John of God have a moral duty to serve the sick and needy especially at this time. But the situation on the ground is different from how you may perceive it from afar. We are 8 Brothers of which only 5 are working and 3 are students. There are 106 Co-workers of which 45 are Nurses and 2 Medical officers and 1 Physician assistant. None of these has any experienced in managing patient in an Ebola outbreak as this. So we strongly believe that when we open the hospital to the public, as the hospital is renowned in the whole country and health services are scarce in the country, there is the high possibility of clients from other infected areas visiting our hospital and because of the influx of patients that could occur, it will indicate a high risk for our staff and other patients.

Since the Cuban Doctors promised by the District Medical officer(DMO) have not appeared yet, and we cannot keep on waiting, we have agreed to provide services only at Out Patient Department strictly consultations and prescription without any Medical Laboratory analysis. We could only carry out Glucose test or Malaria test because of the self test kits available. There will be no Medical admission neither surgery. The biggest question is Antenatal serices. We shall provide Antenatal Services but without delivery. When IMC shall be managing the triage, blood specimen will be sent to Makeni, hopefully for analysis. This will be by December ending if partners respond to calls.

So my dear Friends, I have decided to write so lengthily simply because I would like you to perceive a clear picture of our plight so that you remain very supportive to our mission and never be discouraged to support.

The activity the hospital shall embark on as from Thursday, 13th November, 2014 is monitoring new quarantine homes. This time, 61 households have been quarantined in the chiefdom and we have adopted them. We shall provide them with a comprehensive food and domestic needs package so as to enable them remain at home throughout the 21 days and also remain uninfected from each other whilst at home. Whilst waiting for IMC intervention, we shall be carrying out this activity and at the same time monitoring and supervising the Holding or Lunsar Community Care centre in the Hospital compound which is a life saving intervention for the local community.

God bless you all.