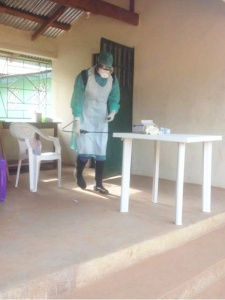 Staff spraying the working environment at the Hospital Gate before staff enter.

As the New Year 2105 begins, many people have anticipated that the Ebola situation will definitely improve. Indeed, the trend is taking a better shape. The number of new infections has reduced by 50% in December, 2014 compared with November 2014. In this few days of January, 2015, we are noticing a gradual progress. Definitely, the hot spot districts remain Western Area (Freetown), Port Loko and Kono. The saddest part of the story is that our only International airport area is becoming infested newly with the Virus. But the Port Loko district Ebola Response centre (PLDERC) has rapidly taken a holistic approach to contain the situation there. We the Brothers of St. John of God and staff are also supporting there currently with nutrition and surveillance.

Re-opening of the Hospital

The St. John of God Catholic hospital has experienced closure since the Ebola outbreak twice. The first time on August 18, 2014 compelled by the Ministry of Health and the second time on September 22, 2014 after the sudden infection of Br. Manuel Garcia Viejo, our Prior General recommended that we shut down in order to revisit our strategies and seek for extra support from local partners in order to establish a safer environment for future service delivery.

Since that time, this process started. We have engaged the Ministry of Health and Sanitation and other partners. Many activities have been carried out. Now the staff have been well prepared and many protective equipment of different kinds have been donated even though we need more. Social Mobilisation and Nutrition services are ongoing. Our staff are now more confident in themselves. The exponential Ebola spread in Marampa is now no more. There are a lot of Ebola facilities now nearby and within the country.

Br. Michael being screened as the first patient at the entrance.

Staff of the Hospital screening on going before entering the hospital.

Some patients waiting to be triaged.

Staff waiting to direct patient to the triage.

Patient sitting and undergoing interviewing at the triage.

The Patient in front of the triage staff with a well protected screen.

WASH staff at the decontamination zone.

All the activities are taking place inside this building.

But what is greatly lacking is the provision of general services. From statistics, more than 15,000 people died of Malaria, TB and HIV in 2014 in Sierra Leone, Liberia and Guinea. And now only about 7,000 persons have died of Ebola in 2014. This reflects that many deaths are from other ailments and which we as a hospital are to answer to now.

Indeed, we have prepared well and taking into consideration the recommendations made by our key local partners, such as International Medical Corps(IMC), Italian Cooperation and the Ministry of Health and Sanitation, a formidable and high level safe triage have been renovated and adopted to suit the purpose. The triage is now functional.

On Tuesday, 6th January, 2015, the St. John of God Catholic Hospital formally re-opens its public services to the Public. On its first day, there was some delays and panic because of the new protocols and procedures of safety. We only received 1 patient. Later, we agreed to keep on going without patients but using dummy patients in order to become familiar with the necessary interventions when real patients are present.

So we are happy and we want to thank you all our formidable friends who have helped us all this far and I believe that you will be as well happy to see the Hospital deliver. Eventually, we shall offer only Out Patients services in January, and progress to provide IPD by February, as we shall have new partners like CUAMM Doctors for Africa and Italian Cooperation Epidemiologist at this time.

Thank you all once again.
Br. Michael M. Koroma